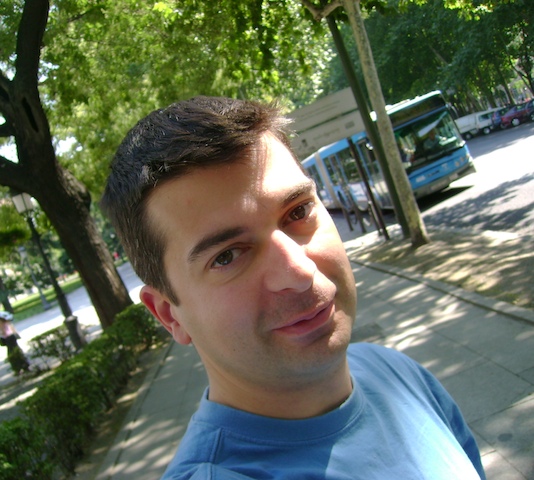 
For more information, take a look at my publications and my former Ph.D. project's page.

I'm looking for master and Ph.D students to assist me in my research projects in the fields of automated planning, and games and serious games. Available projects could be on fundamental research or applied research, depending of personal interests of candidates.


Before his graduate studies, Éric Beaudry was a research assistant at CARTEL, a research center in remote sensing at Université de Sherbrooke. Éric holds a master (2006) and a Ph.D. (2011) in computer science from Université de Sherbrooke in the fields of artificial intelligence (AI) and mobile robotics. He was a member of Planiart et d'IntRoLab, respectively two labs conducting research in AI planning and mobile robotics. In 2005 and 2006, IntRoLab and Éric has recevied many awards at the AAAI Robot Challenge, a robotics competition taking place at the prestigious annual conference of the Association for the Advancement of Artificial Intelligence. In March 2011, Éric has defended his Ph.D. thesis on Planning concurrent actions under uncertainty. After his Ph.D., Éric spends few months as a postdoctoral fellow at the center of Defence Reseach and Development Canada (DRDC) where he continues his research on planning under uncertainty. He has developped te planner in the core of CORALS, a prototype for real-time decision support for combat operators on the Canadian frigates. From July to December 2011, Éric is a research fellow at the Intelligent Systems Division at NASA Ames Research Center in California (USA). He works to improve its planning algorithms to demonstrate their applicability to space exploration missions. From January 2012, Éric will join the Département d'informatique of Université du Québec à Montréal (UQÀM) as assistant professor. He will continue his research in automated planning and will investigate their application to serious games. Graduate studies of Éric has been funded by scholarships from the Natural Sciences and Engineering Research Council of Canada (NSERC) and the Fonds québécois de recherche sur la nature et les technologies (FQRNT). His results has been presented and published in several international conferences and journals.